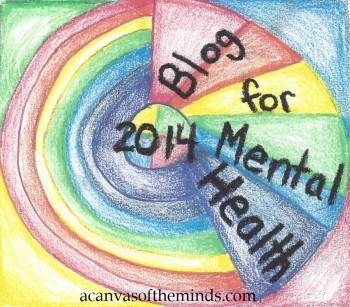 Before starting this blog post I'd like to highlight a great initiative called the Blog for Mental Health Project 2014. Here are the original words from the founder herself, which I wholeheartedly endorse:

“I pledge my commitment to the Blog for Mental Health 2014 Project. I will blog about mental health topics not only for myself, but for others. By displaying this badge, I show my pride, dedication, and acceptance for mental health. I use this to promote mental health education in the struggle to erase stigma.”

The aim of cognitive psychotherapy is to change maladaptive behaviours and emotions, by changing the way we evaluate life experiences (the way one experiences depends on the patterns and the type of links between schemas). Cognitive psychotherapy is therefore based on models of mental functioning developed by cognitive psychology. It is mainly based on the theory of linear information processing and earlier theories of emotional evaluation, according to which, emotions are the result of processing of conceptual states of physiological activation for which the subject has no immediate explanation (Schachter & Singer, 1962). Emotions are considered to be the result of cognitive appraisal and therefore to understand a patient’s emotional reactions it is necessary to identify the thought processes that preceded them. Cognitivists in fact, argue that thoughts cause emotional reactions and result in particular behaviour. According to the cognitive model, psychological disorders are therefore considered to be the inadequate expression of emotions. Therefore, it follows that dysfunctional thoughts are responsible for psychological disorders. The clinical consequence is that, to intervene on disturbing emotions, the therapist must restructure the processes of distorted thinking that gave rise to these emotions. In cognitive therapy we aim to get to the bottom of the patients’ emotions through their cognitions; by modifying incorrect beliefs you may terminate or alter the patient’s inappropriate and excessive emotional reactions. What is shown by clinical research on cognitive therapy is that changing dysfunctional thoughts produces an improvement in symptoms whilst modifying dysfunctional beliefs leads to a long lasting remission (Beck A. T., 1996).

The cognitive model can be represented in a fairly comprehensive way, both in its theoretical assumptions as well as its clinical application, by the work of Aaron Beck and Albert Ellis. Ellis proposes an approach called rational emotive therapy (RET) - he labels the thoughts that cause emotional distress as irrational beliefs. Beck on the other hand, proposes Cognitive Behavioural Therapy (CBT) - he labels thoughts that cause emotional distress as cognitive distortions. It should be noted that in their respective therapeutic models, neither Beck nor Ellis, limit themselves to the cognitive approach, but consider the complex interactions between cognitions, behaviours and emotions. It is no coincidence Ellis changed the definition of "rational therapy" into "rational emotive therapy" (RET) and, more recently, into "rational emotive behaviour therapy” (REBT). Consequently, Beck as well as Ellis, propose a multimodal intervention that, in addition to the techniques of cognitive restructuring, provides behavioural tasks and emotional regulation techniques. In his work, Beck focuses much of his attention on eliciting distorted and unrealistic information processing, defining the identification of rules, attitudes and assumptions that each individual uses to interpret his own experience, as the main objective of therapeutic work (Beck A. T., 1970). These rules, attitudes and assumptions may not be immediately available to the conscious mind, but still determine the individual's emotional reactions, through intermediaries known as automatic thoughts; these thoughts tend not to be recognised by the patient due to the extreme rapidity of their activation. Therefore, according to Beck’s model, whilst a patient is experiencing a particular situation, the situation is evaluated not only according to his conscious thoughts, but also according to those that occur automatically and which are not usually under the immediate control of the patient.

According to Beck’s cognitive approach, difficulty recognising automatic thoughts is not dependent upon resistance or defence mechanisms, but upon the habit of paying attention to and focusing on them. The therapist’s task is to help the patient to focus his attention and to identify those automatic thoughts that led to the disturbing emotions. This is not an easy task to accomplish, and I believe that it is of paramount importance that as therapists, we should first be able to identify our own automatic thoughts, before attempting to help our patients identify theirs. Becoming conscious of my automatic thoughts and gaining a certain level of mastery over them, has undoubtedly helped me in many spheres of both professional and personal life. It is only when these automatic thoughts are identified, that we are then able to proceed to restructuring distorted cognitions, by helping the patient to explore their underlying belief system, examine the hidden meanings of their thoughts, and to subsequently test their validity. According to James (2004) CBT allows us to understand the interconnections between psychopathology through four sub-components: thoughts, emotions, feelings and behaviours. In order to understand how these interconnections develop and are maintained, it is necessary to examine in what situations - present or past - these components have been activated simultaneously. In this way it is possible to identify a higher-level theme that helps to explain the psychopathology of the patient over time and in different situations; this theme is known as the core belief. A core belief is the verbal representation of a schema with which the patient identifies and determines a strong emotional activation; it is associated with a schema that is activated effortlessly and expresses the convictions of the subject not only related to the self, but also social, cultural and religious convictions. Intervening at the cognitive level and succeeding to change beliefs, results in both changes in mood and behaviour, and evidence suggests (Free, Oei, & Appleton, 1998) that this change occurs at a biochemical level. Studies have in fact shown that cognitive therapy works through its ability to change beliefs and modes of information processing and that different aspects of cognitive processes play a role in the process of change (Hollon, DeRubeis, & Evans, 1996).

Beck identified a number of “errors of cognition”, which were further developed by Burns (1989), which were seen to be of fundamental importance in the development and maintenance of a number of disorders, especially depression. These include all-or-nothing thinking (splitting), overgeneralization, magical thinking, filtering, disqualifying the positive, jumping to conclusions, mind reading, fortune telling, magnification and minimization, catastrophising, emotional reasoning, should statements, labelling and mislabelling and personalisation. An impressive body of research has also shown that reasoning, inferences and assumptions can be misleading, especially under conditions of uncertainty, which is the natural state in which we measure our rationality (Tversky & Kahneman, 1974; Boudon, 1994). Dysfunctional assumptions are fundamental rules and principles that guide behaviour, and probably have their origins in the experiences we make as we grow up; these elements are therefore implicit but can be deduced from the interpersonal behaviour of the individual. For example, I had a 42 year-old depressed gentleman, who over the course of his life had tried to be liked by one and all and constantly avoided disagreements with people; in the process subduing his own feelings and desires. On those occasions when he thought there was the possibility that he could have done something that would have resulted in his partner not liking him, he felt empty and desperate, and thought he would end up alone and abandoned; he felt that he was not a “complete” person. His dysfunctional assumption may be characterised as follows: to be a complete person I must be surrounded by others. From this it follows that he would rarely contradict or have a conflict with others, for fear of being rejected. As I realised with this particular patient, patients are usually aware of their inferences (i.e. the contents). This awareness can manifest itself in a verbal form, such as a sentence or may also take the form of images or fragments of them, or patients may also hear phrases, for example, in the imperative form, such as rules or commands. However, patients are less aware of their evaluations, and only rarely are aware of dysfunctional assumptions.

Look out for part two, for a look at a typical cognitive formulation...